In recent years, the term ‘Anthropocene’ has taken centre stage in debates about climate change and global warming. The name was proposed in 2000 by natural scientists to designate the current geological epoch as the ‘time of the human’, set to succeed the Holocene, but in recent years it’s ignited hot debates among social scientists and philosophers.For a concise and accessible history of the origins of the term Anthropocene, including its nineteenth century predecessors (such as ‘Anthropozoic Era’), see: Lewis, Simon L. and Maslin, Mark. 2018. The Human Planet: How We Created the Anthropocene. London: Pelican Books.Artists and photographers have taken note as well, as the term frequently appears in their discussions and in writing about their work. More and more artists are trying to capture images of or imagine what the term signifies, from straightforward documentation of climatic events threatening human settlements to deeper ways of relating to the human-nature complex.

In 2007 and 2008, I worked as a researcher for Paradox (a Dutch producer of multiplatform photography and film projects) on a large-scale documentary. The Last Days of Shishmaref comprised a feature-length documentary by director Jan Louter and an extensive photo series by photographer Dana Lixenberg. A team compiled by Paradox mainly worked on turning Lixenberg’s photographs into a photobook, an exhibition, a project website and, later, a web documentary (released in 2010). Louter’s documentary, which had a limited release in cinemas and was screened at international film festivals, focuses on how a few families in Shishmaref, Alaska, view changing environmental conditions and their foreseeable consequences for the village.

Along with thirteen other Alaskan coastal villages, Shishmaref has been severely threatened with erosion since the beginning of this century. During a series of November storms over the past two decades, Shishmaref, which sits on a barrier island off the coast of the Seward Peninsula, near the Bering Strait, has lost at least fourteen homes to the sea. In 2008, the United States Army Corps of Engineers started construction on a storm surge barrier consisting of basalt blocks, but this solution can only be temporary. Within one or two generations, all of the approximately 600 inhabitants will have to move to higher ground on the mainland.

Louter referred to the villagers as belonging to the first generation of ‘climate refugees’ right at the time when the news broke that several small islands in the Pacific had sunk below sea level. For some Polynesian nations, the situation was already direr than that of Alaskan villages, although it’s true that global warming conditions proceed much more quickly in the polar regions. This year, for example, Alaska experienced unprecedented heat waves and multiple forest fires.

Without much environmental concern, I booked flights to the United States in the spring of 2008 for my research in museums and archives in New York City and Washington D.C., in the Alaskan cities of Fairbanks and Anchorage, and subsequent fieldwork in Shishmaref. Strangely, I had no qualms about my carbon footprint while I participated in an endeavour aimed at raising awareness of the grave consequences of excessive release of greenhouse gasses into the atmosphere. I had vague memories of a 1980s public campaign in the Netherlands, including the slogan ‘A better environment begins with you.’ However, I was too immersed in studying the Inupiaq-EskimoThe exonym Eskimo is controversial. Most indigenous people in the circumpolar regions nowadays refer to themselves using indigenous names. In Alaska, the southwestern Yup’ik and northwestern Inupiaq still tag Eskimo onto the endonym or refer to themselves more broadly as Alaskan Eskimos.culture and history and searching for any historical documents related to Shishmaref that I could lay my hands on. Any worries about my own climatic impact were secondary.

A decade later, environmental concerns have risen on the global political agenda, and rightfully so, as the situation for vulnerable populations has only worsened. Despite the many conferences and international agreements, both binding and non-binding, the human consumption of fossil fuels and the release of greenhouse gasses have continued to increase. Awareness is one thing, swift political change another. It seems that, for the time being, we’ll remain trapped within a political-economic system based on limitless growth at the expense of ecological resilience and sustainability. For a long time, we (most of all people whose demand on natural resources exceeds the biocapacity per person) behaved as if no outside force could ever stop the march of progress.

On a return flight from Alaska, I began reading a 2007 reissue of The Weather Makers (2005), Tim Flannery’s popular science book about humanity’s influence on climate change, and James Lovelock’s poignant The Revenge of Gaia (2006), a plea for the rapid decarbonisation of society. I felt I needed to learn at least a minimum of background while working on a project in which global warming was a major theme. And while the term ‘Anthropocene’ was already there in Flannery’s book, I barely took notice.

Many years later, in 2015, when the increasingly urgent topic of global warming was becoming impossible to ignore, I attended a lecture by Bruno Latour in a theatre in Utrecht, and the term ‘Anthropocene’ resurfaced.Latour, Bruno. 2015. How to Sort Out the Many Ambiguities of the Concept of the Anthropocene. Lecture given at Stadsschouwburg, Utrecht, 15 April 2015. A revised version of this lecture was later included as a chapter in Latour, Bruno. 2017. Facing Gaia: Eight Lectures on the New Climatic Regime. Cambridge: Polity Press. Latour spoke like an eloquent prophet of doom, and his words were supported by his four decades of deep reading and thinking about exchanges between science and society since the seventeenth century. Latour opened my eyes in that I began to understand that the problems posed by the Earth’s warming shouldn’t only be interpreted technologically; rather, they’re fundamentally of a religious and ethical nature. In Latour’s terms, we must feel the Earth trembling as if the apocalypse is happening right now and not in some mythical past or ominous future. In another telling metaphor, he spoke of how modernists tend to assume nature to be a passive backdrop to their activities but that we’re now rediscovering it happens to have a will of its own. Through all sorts of unpredictable and uncontrollable acts, nature claims an important role on the stage of human activities.

I began to reflect on the roles photographers and visual artists can play in addressing this new condition. The tentative and highly controversial concept of the Anthropocene hints at an issue so large and pervasive that it undermines all comfortable certainties. How on Earth could this be appropriately depicted? The world-famous photograph AS08-14-2383, taken on Christmas Eve, 1968, by astronaut William Anders during the Apollo 8 mission to the Moon, hasn’t done much to prevent the levels of human-emitted greenhouse gasses from further increasing. The photograph, more commonly known as Earthrise, inspired a generation of environmentalists and was famously featured on the cover of the American countercultural magazine Whole Earth Catalog (1968-1972).

For a while, I thought the documentary approach taken by Louter and Lixenberg was the way to portray climate change. It’s of course important that the impact of rising sea levels or melting permafrost on human settlements be documented in an honest manner. Yet, despite all our documentary efforts, nothing seems to change fundamentally, or not fast enough considering the speed of climatic changes. The concept of the Anthropocene is perhaps better expressed by means of the hockey stick graph. This line with a strong upward curve at the end represents the sudden rise in global mean temperatures over the last century. But the same type of graph results from many other analyses of changes related to the impact of human civilisation on ecosystems, from the exponential growth of the human population to the extinction of species.

Despite its limitations in representing longer durations, let alone geological timescales, photography has proven to be a suitable medium for recording changes like the retreat of glaciers. This type of ‘comparative photography’ is a popular means of demonstrating that the melting of icecaps is real and swift. It’s also been artistically adapted by photographers such as Mark Klett and, more recently, Chrystel Lebas.

Klett’s Third View project is a meticulous re-photographing of the exact locations of previous American landscape photographs, some over a century old. By overlaying two or three photographs in a slideshow of the same location over a multi-generational timespan, the viewer can see these gradual changes within a fraction of a second. Lebas’ series Field Studies: Walking Through Landscapes and Archives more or less follows the same procedure, albeit in a freer mode. Lebas literally followed the footsteps of British botanist and ecologist Sir Edward James Salisbury (1886-1978), whose field notes and hitherto unexplored photographic glass plates depicting the flora and landscapes of Scotland and Norfolk provided the blueprint for Lebas’ re-photographing of these landscapes a century later.

My encounter with the work of two other artists put me on the track to imagining alternatives to the complex topics of climate change and man-nature relationships. I believe that storytelling, whether in words or graphics, may be best suited to narrating the unfolding apocalypse, and I also believe that photography and related methods can communicate urgency without compromising artistic vision and autonomy. The fact that photography is itself a strange hybrid between high technology and natural appearance already provides the impetus to think through the intersections of the powers of humanity and nature.

The Fotogramme series that Eva-Fiore Kovacovsky has been producing since 2011 reflects this hybrid condition in a way that’s timeless and contemporary in equal measure. These photograms are improvised compositions of leaves that Kovacovsky has collected throughout the years, many of which come from linden and alder trees. In her darkroom, Kovacovsky experiments with employing colour filters to arrive at prints of a hallucinatory nature. The leaves leave their imprint as if they’re fossils from the deep past, while the process also returns to the earliest days of photography in which pioneers such as Anna Atkins made contact prints with algae. For Kovacovsky, the concept of symbiosis, as developed and described by biologist Lynn Margulis, is an important source of inspiration. In this case, Symbiosis also extends to the way in which she seamlessly interweaves the artificial and the natural. 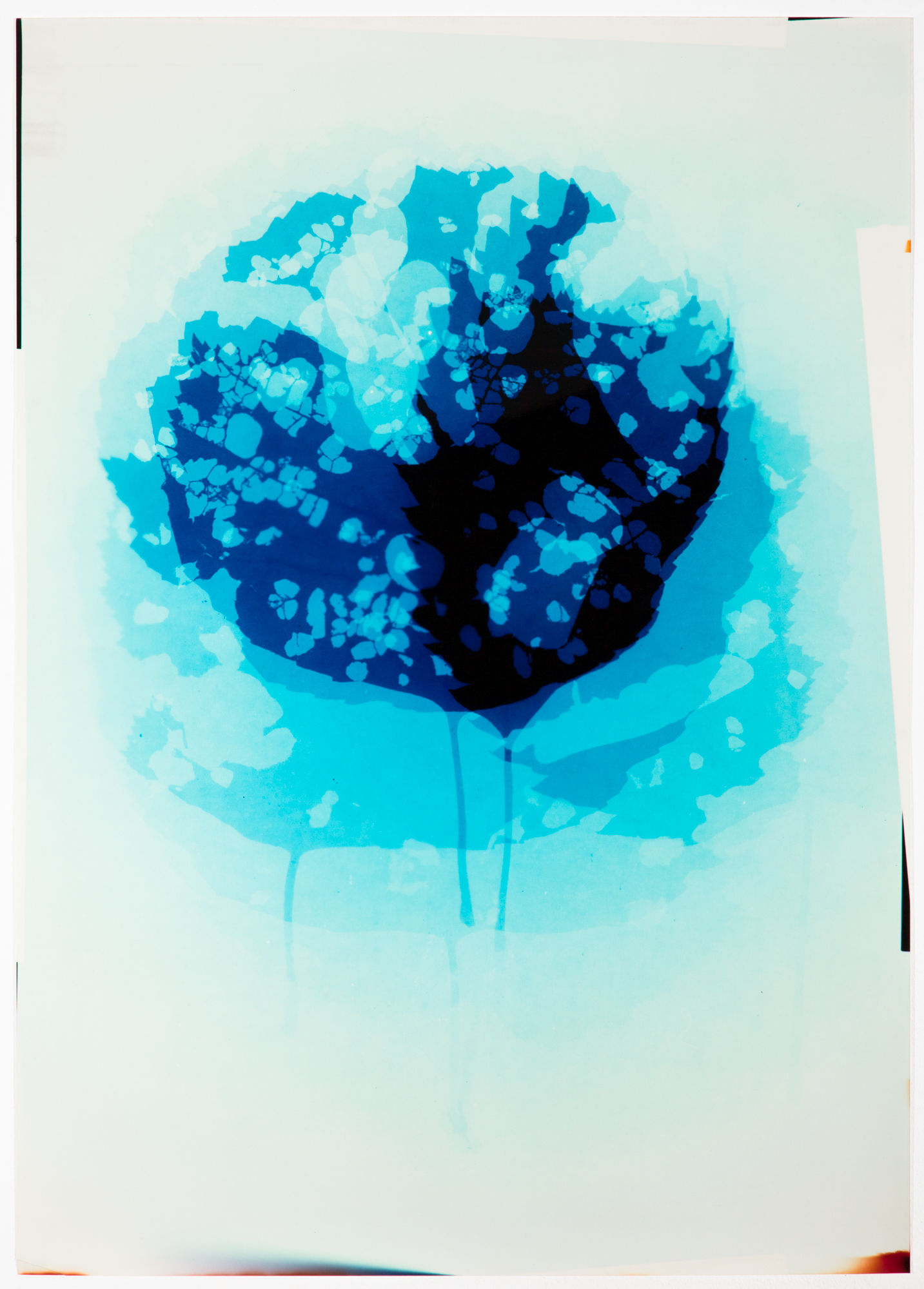 © Eva-Fiore Kovacovsky
From the series Fotogramme (2011-ongoing)
Image courtesy of the artist and Galerie Stampa, Basel 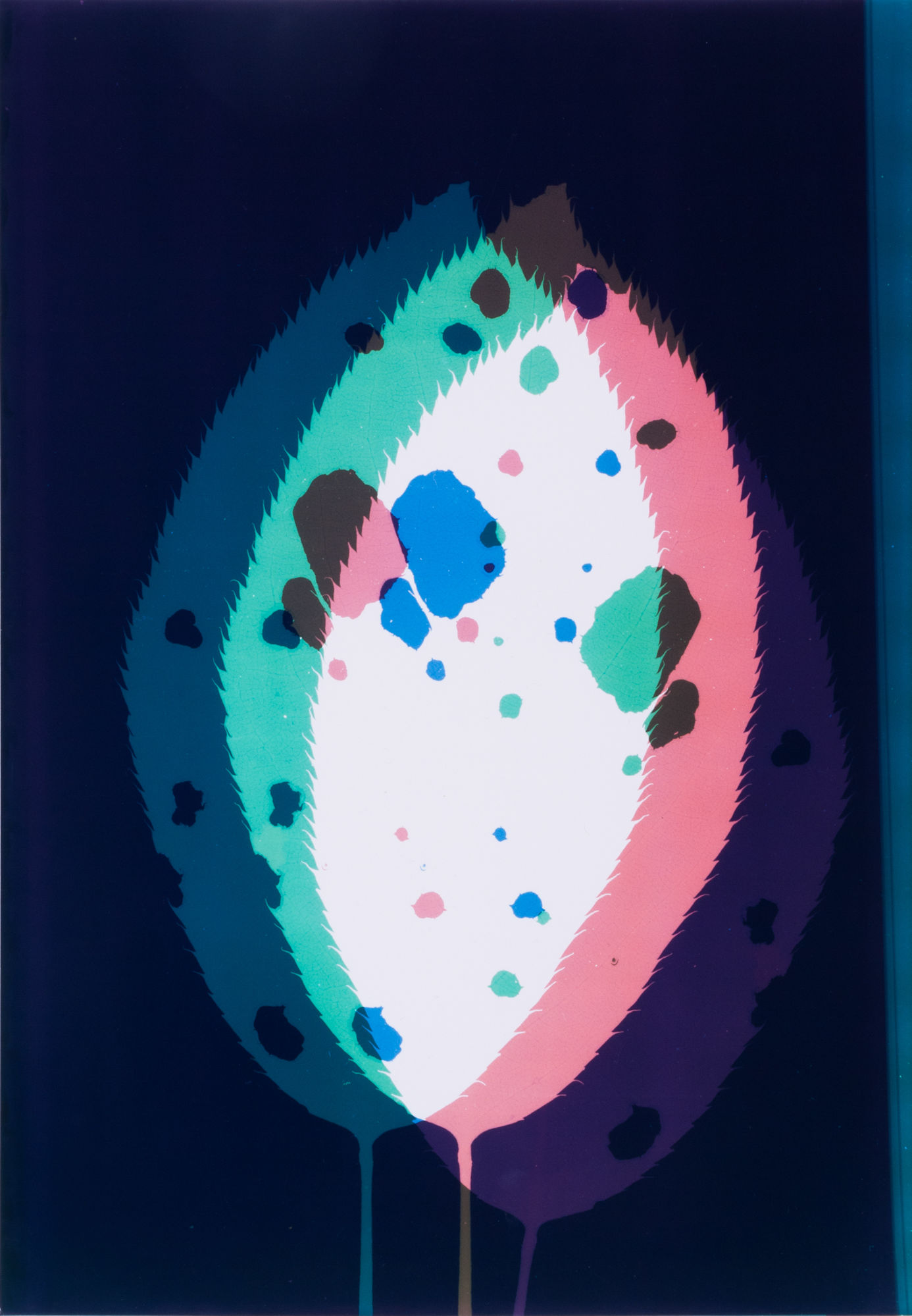 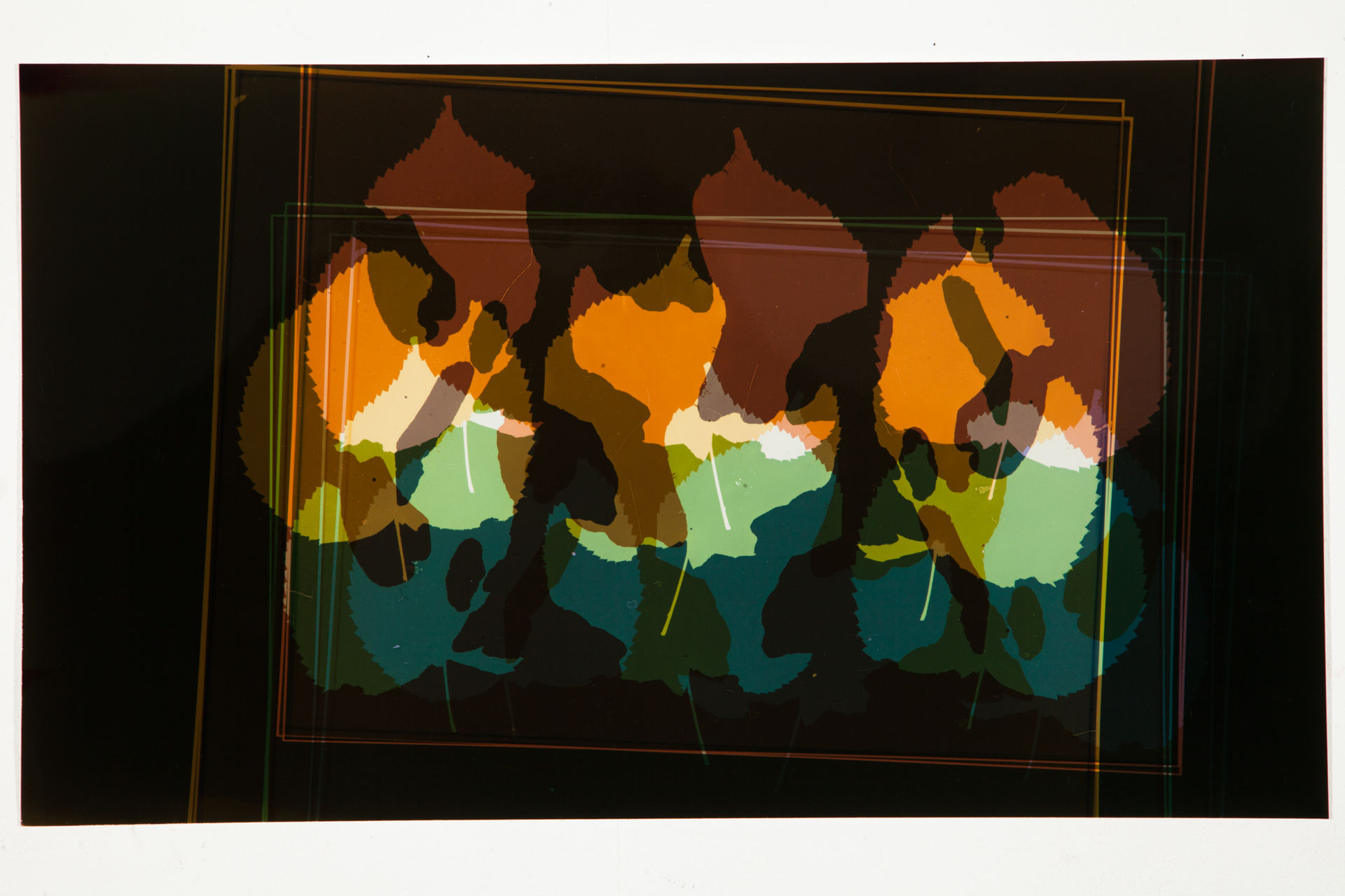 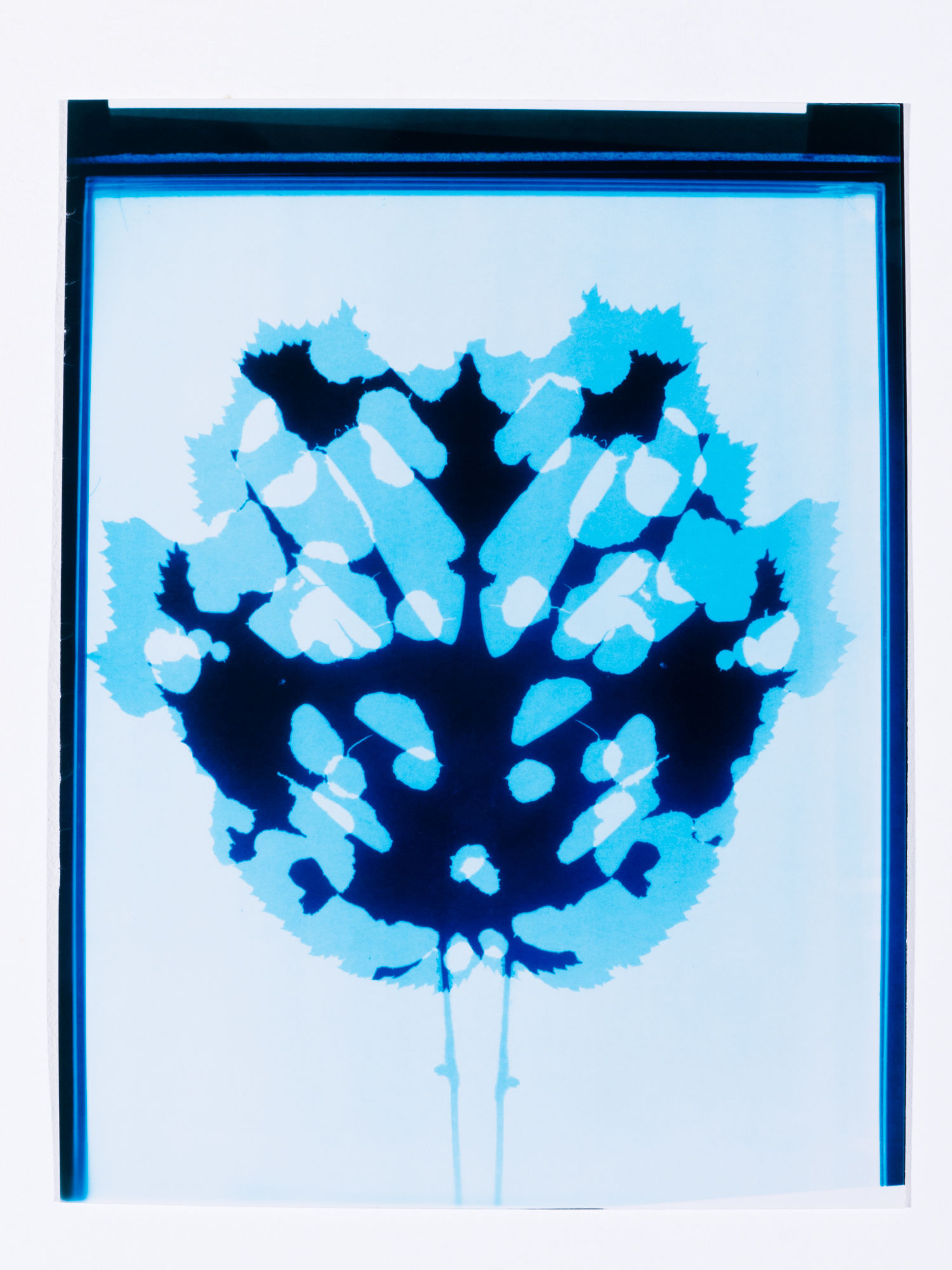 Closely related in method and outlook is Suzette Bousema’s series of photograms titled Future Relics. For a time, Bousema made photograms (akin to the Atkins-like cyanotypes from the 1840s) of every piece of plastic waste she found. The irony is in the contrast between a historical printing technique and the hint in the title that plastics will remain on Earth for a long time to come; the Anthropocene may as well be renamed the Plasticocene. In Climate Archive, the series with which Bousema graduated from The Hague Royal Academy of Art in 2019, a warped notion of time is again at play. Frontal monochrome photographs show samples of the ice cores that provide scientists with a record of up to 800,000 years of climate history.

In the face of current warming conditions, the impact of which, on a scale of epochs, must be considered sudden and swift, the work of photographers and other visual artists may seem futile. Nevertheless, I place my hope in art as an instigator of fruitful debates and as a means of imagining new or renewed man-nature relationships. 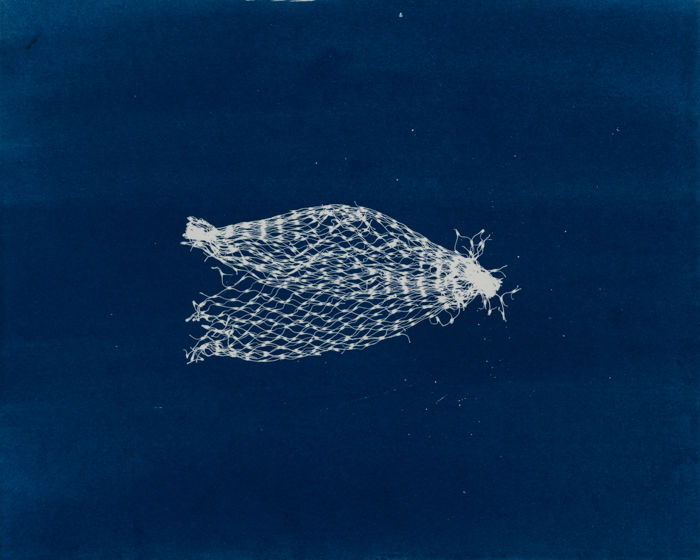 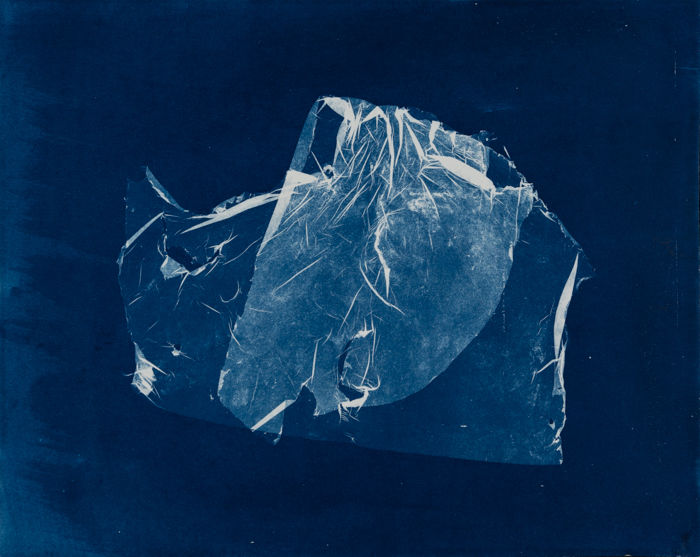 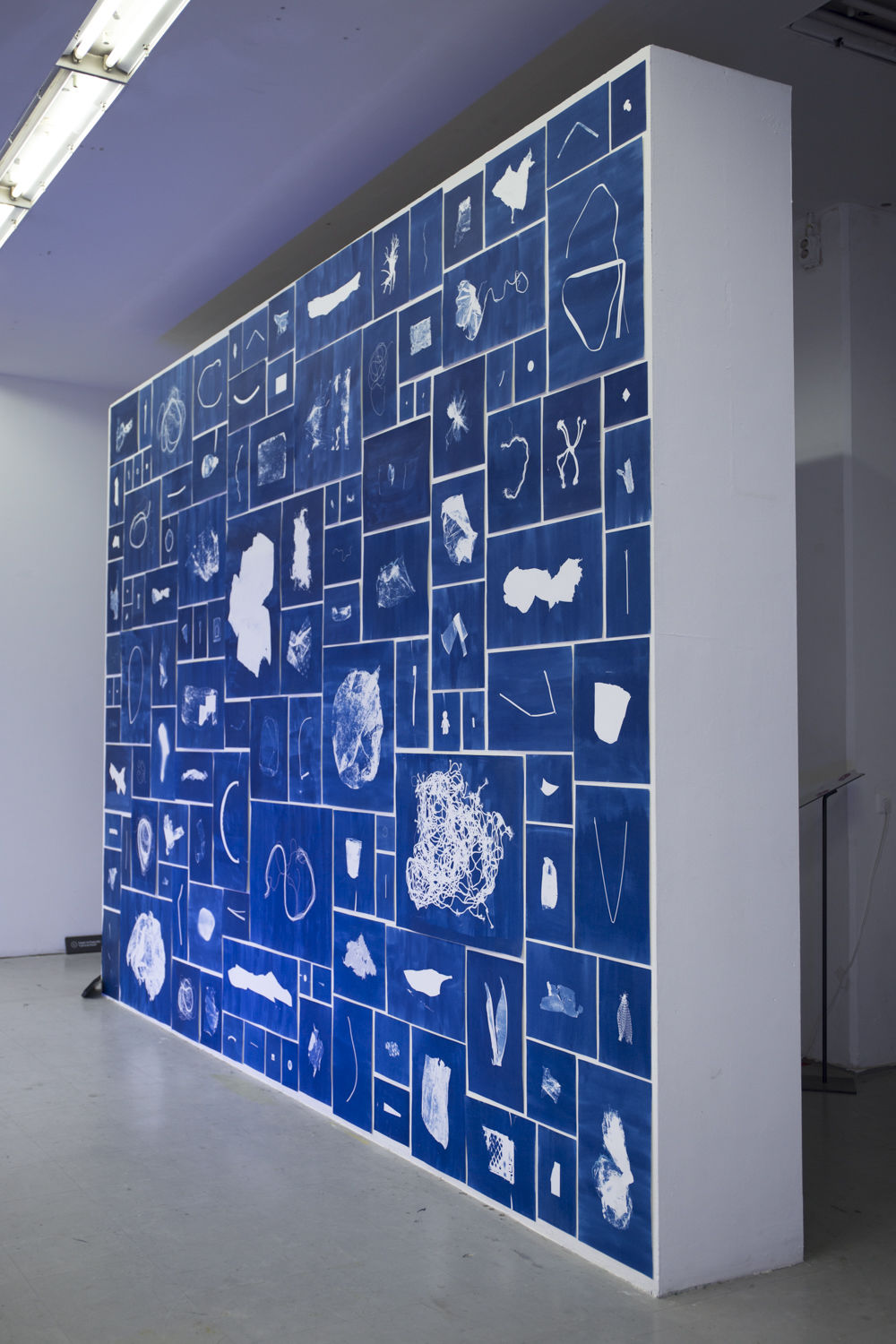 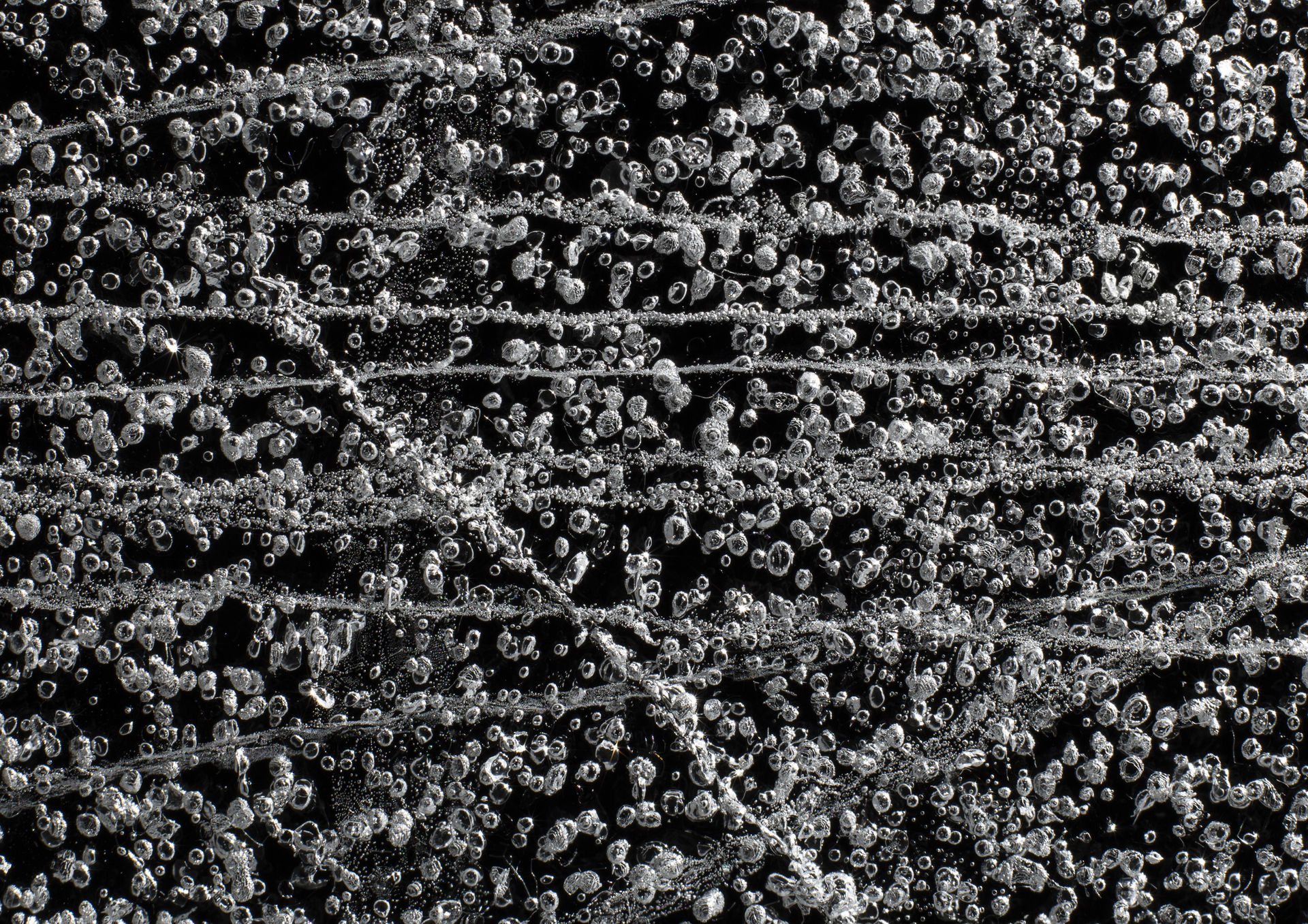 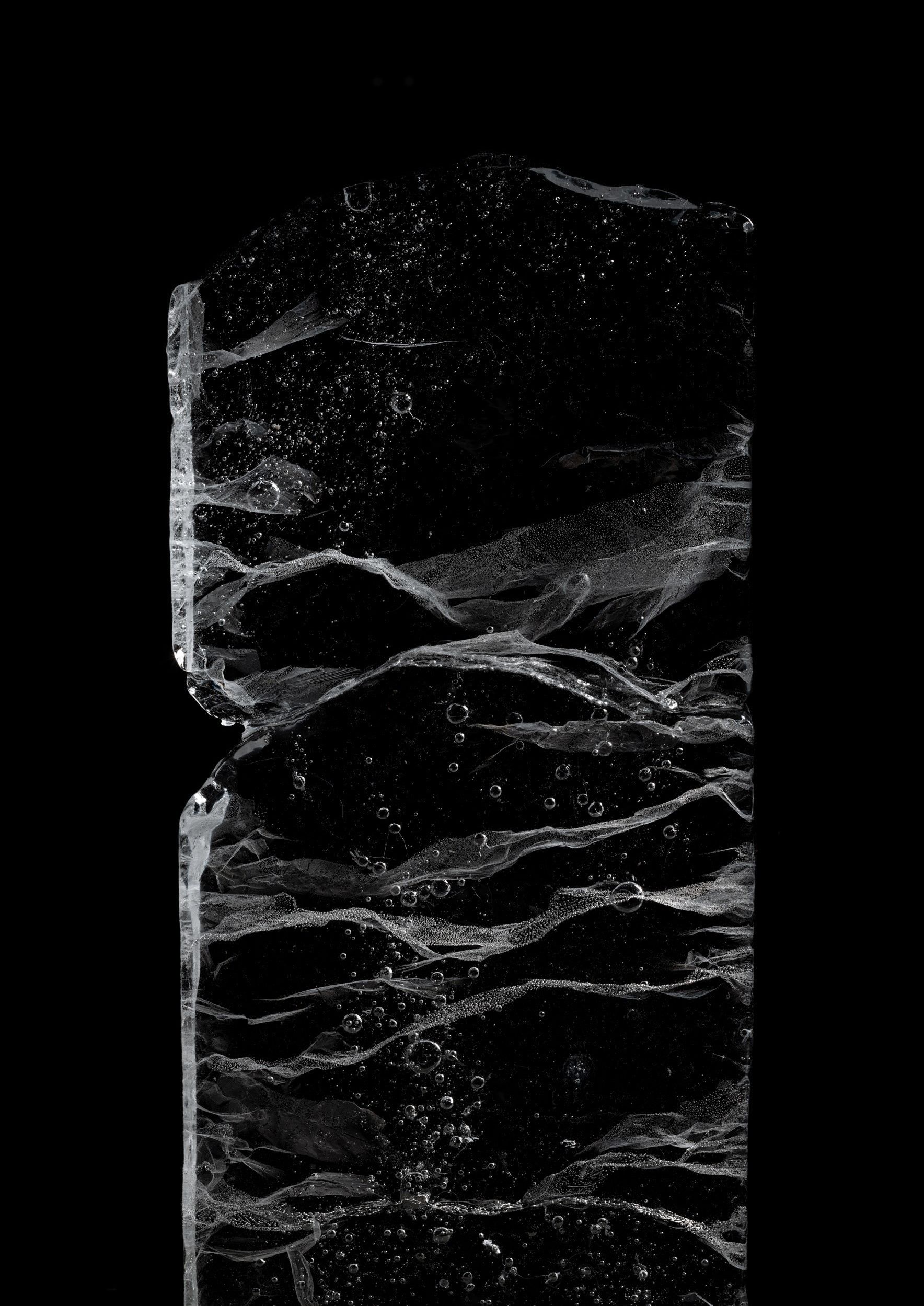 Taco Hidde Bakker works as a writer, editor, translator, researcher, and lecturer. He completed a Master’s degree in Photographic Studies at Leiden University with a thesis combining photography theory and anthropology (2007). His writings about art and photography have been published in (artist’s) books and periodicals as Camera Austria International, Foam Magazine, EXTRA, British Journal of Photography, The PhotoBook Review, and others. His first volume of essays, The Photograph That Took the Place of a Mountain, was published by Fw:Books in 2018.